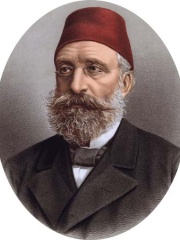 Ahmed Şefik Midhat Pasha (Ottoman Turkish: احمد شفيق مدحت پاشا‎‎, 18 October 1822 – 26 April 1883) was an Ottoman democrat, kingmaker and one of the leading statesmen during the late Tanzimat period. He is most famous for leading the Ottoman constitutional movement of 1876 and introducing the First Constitutional Era, but was also a leading figure of reform in the educational and provincial administrations. He was part of a governing elite which recognized the crisis the Empire was in and considered reform to be a dire need. Read more on Wikipedia

Midhat Pasha was a reformer in the Ottoman Empire. He is most famous for his policies that were meant to modernize the empire.

Among politicians, Midhat Pasha ranks 2,642 out of 15,710. Before him are Canute I of Sweden, B. J. Habibie, Otto III, Duke of Bavaria, George V of Hanover, Frederick Christian, Elector of Saxony, and Gaius Marcius Coriolanus. After him are Megawati Sukarnoputri, Manfred Gerlach, Maurice Quentin de La Tour, Karolos Papoulias, Charles III of Navarre, and Frederick II, Duke of Swabia.