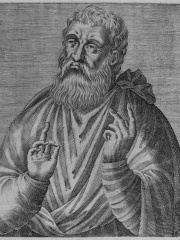 Justin martyr is most famous for being the first Christian martyr. He was killed in 165 A.D. for refusing to renounce his faith.

Among people born in 100, Justin Martyr ranks 13. Before him are James the Less, Decebalus, Pope Telesphorus, Pope Hyginus, Saint Sarah, and Pope Victor I. After him are Ananias of Damascus, Philemon, Lydia of Thyatira, Cornelius the Centurion, Philip the Evangelist, and Agabus. Among people deceased in 165, Justin Martyr ranks 2. Before him is Appian. After him are Taejodae of Goguryeo, Felicitas of Rome, and Chadae of Goguryeo.