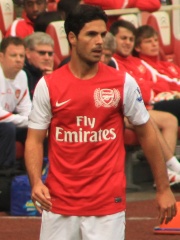 Mikel Arteta Amatriain (born 26 March 1982) is a Spanish professional football manager and former player. He is currently the manager of Premier League club Arsenal.Born in San Sebastián, Arteta began his senior career at Barcelona in 1999, but limited playing time led to a loan move to Paris Saint-Germain in 2001. He then signed for Rangers, winning the domestic double of the Premier League and League Cup in his debut season. Read more on Wikipedia

Since 2007, the English Wikipedia page of Mikel Arteta has received more than 4,061,326 page views. His biography is available in 50 different languages on Wikipedia making him the 1,796th most popular soccer player.