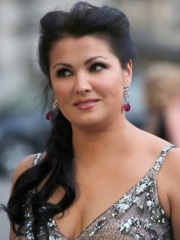 Anna Yuryevna Netrebko (Russian: Анна Юрьевна Нетребко; born 18 September 1971) is a Russian operatic soprano who has an active international career and performed prominently at the Salzburg Festival, Metropolitan Opera, Vienna State Opera, and The Royal Opera. In 2022, following the start of the Russo-Ukrainian War she stated she would retire from concert life but later announced plans to resume her performances from May 2022. As the part of 2022 boycott of Russia and Belarus, her performances and appearances with the Bavarian State Opera and Metropolitan Opera were canceled when the organizers accused her of refusing to publicly distance herself from Vladimir Putin during the Russo-Ukrainian War. Read more on Wikipedia

Anna Netrebko is a Russian opera singer who is most famous for her performances in "La Traviata" and "Don Giovanni."