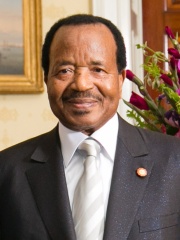 Paul Biya (born Paul Barthélemy Biya'a bi Mvondo; 13 February 1933) is a Cameroonian politician who has served as the president of Cameroon since 6 November 1982. He is the second-longest-ruling president in Africa, the oldest head of state in Africa, and the longest-ruling non-royal leader in the world. A native of Cameroon's south, Biya rose rapidly as a bureaucrat under President Ahmadou Ahidjo in the 1960s, serving as Secretary-General of the Presidency from 1968 to 1975 and then Prime Minister of Cameroon from 1975 to 1982. Read more on Wikipedia

Paul Biya is most famous for being the president of Cameroon since 1982. He has been accused of corruption and human rights violations.

Among politicians, Paul Biya ranks 1,517 out of 15,577. Before him are Stjepan Mesić, Theodoric I, Athaulf, Carlos I of Portugal, Halimah bint Abi Dhuayb, and Gallienus. After him are David IV of Georgia, Giuliano de' Medici, Duke of Nemours, Emperor Yang of Sui, Oswald Mosley, Haggai, and Jehoiakim.

Among POLITICIANS In Cameroon