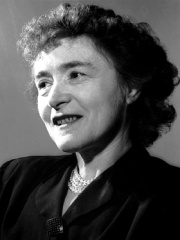 Gerty Theresa Cori (née Radnitz; August 15, 1896 – October 26, 1957) was an Austro-Hungarian-American biochemist who in 1947 was the third woman to win a Nobel Prize in science, and the first woman to be awarded the Nobel Prize in Physiology or Medicine, for her significant role in the "discovery of the course of the catalytic conversion of glycogen".Cori was born in Prague (then in the Austro-Hungarian Empire, now the Czech Republic). Gerty was not a nickname, but rather she was named after an Austrian warship. Growing up at a time when women were marginalized in science and allowed few educational opportunities, she gained admittance to medical school, where she met her future husband Carl Ferdinand Cori in an anatomy class; upon their graduation in 1920, they married. Read more on Wikipedia

Among CHEMISTS In Czechia