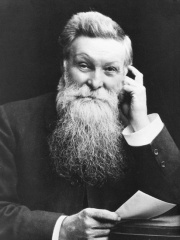 John Boyd Dunlop (5 February 1840 – 23 October 1921) was a Scottish inventor and veterinary surgeon who spent most of his career in Ireland. Familiar with making rubber devices, he re-invented pneumatic tyres for his child's tricycle and developed them for use in cycle racing. He sold his rights to the pneumatic tyres to a company he formed with the president of the Irish Cyclists' Association, Harvey Du Cros, for a small cash sum and a small shareholding in their pneumatic tyre business. Read more on Wikipedia

Since 2007, the English Wikipedia page of John Boyd Dunlop has received more than 365,791 page views. His biography is available in 48 different languages on Wikipedia making him the 39th most popular inventor.

Among people born in 1840, John Boyd Dunlop ranks 9. Before him are Émile Zola, Auguste Rodin, Murad V, Victoria, Princess Royal, Alphonse Daudet, and Odilon Redon. After him are Crazy Horse, Ernst Abbe, Edward Drinker Cope, Carlota of Mexico, Carl Menger, and Father Damien. Among people deceased in 1921, John Boyd Dunlop ranks 6. Before him are Camille Saint-Saëns, Enrico Caruso, Peter Kropotkin, Gabriel Lippmann, and Peter I of Serbia. After him are Ludwig III of Bavaria, Talaat Pasha, Carl Menger, Antoni Grabowski, Augusta Victoria of Schleswig-Holstein, and Nicholas I of Montenegro.