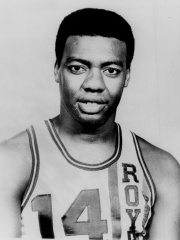 Oscar Palmer Robertson (born November 24, 1938), nicknamed "the Big O", is an American former professional basketball player who played for the Cincinnati Royals and Milwaukee Bucks in the National Basketball Association (NBA). Robertson played point guard and was a 12-time All-Star, 11-time member of the All-NBA Team, and one-time winner of the MVP award in 14 seasons. In 1962, he became the first player in NBA history to average a triple-double for a season. Read more on Wikipedia

Since 2007, the English Wikipedia page of Oscar Robertson has received more than 2,813,758 page views. His biography is available in 38 different languages on Wikipedia making him the 8th most popular basketball player.