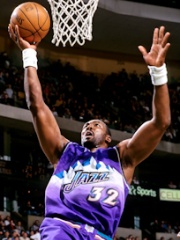 Karl Anthony Malone (born July 24, 1963) is an American retired professional basketball player. Nicknamed "the Mailman", he is considered one of the greatest power forwards in NBA history.Malone spent his first 18 seasons (1985–2003) in the National Basketball Association (NBA) with the Utah Jazz and formed a formidable duo with his teammate John Stockton. He was a two-time NBA Most Valuable Player, a 14-time NBA All-Star, and an 11-time member of the All-NBA first team. Read more on Wikipedia

Since 2007, the English Wikipedia page of Karl Malone has received more than 6,665,978 page views. His biography is available in 46 different languages on Wikipedia making him the 19th most popular basketball player.