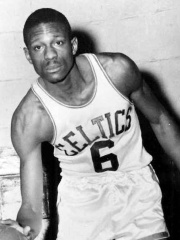 William Felton Russell (born February 12, 1934) is an American former professional basketball player who played as a center for the Boston Celtics of the National Basketball Association (NBA) from 1956 to 1969. A five-time NBA Most Valuable Player and a 12-time All-Star, he was the centerpiece of the Celtics dynasty that won eleven NBA championships during his 13-year career. Russell and Henri Richard of the National Hockey League are tied for the record of the most championships won by an athlete in a North American sports league. Russell led the San Francisco Dons to two consecutive NCAA championships in 1955 and 1956, and he captained the gold-medal winning U.S. Read more on Wikipedia