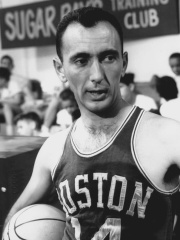 Robert Joseph Cousy (, born August 9, 1928) is a retired American professional basketball player. Cousy played point guard with the Boston Celtics from 1950 to 1963, and briefly with the Cincinnati Royals in the 1969–70 season. Making his high school varsity squad as a junior, he went on to earn a scholarship to the College of the Holy Cross, where he led the Crusaders to berths in the 1948 NCAA Tournament and 1950 NCAA Tournament, and won NCAA All-American honors for three seasons. Read more on Wikipedia

Since 2007, the English Wikipedia page of Bob Cousy has received more than 1,382,109 page views. His biography is available in 34 different languages on Wikipedia making him the 21st most popular basketball player.