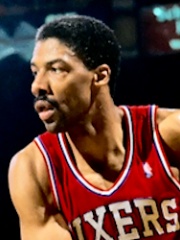 Julius Winfield Erving II (born February 22, 1950), commonly known by the nickname "Dr. J", is an American retired basketball player who helped popularize a modern style of play that emphasizes leaping and playing above the rim in his career at the ABA and the NBA. Regarded as one of the greatest and most influential basketball players of all time, Erving helped legitimize the American Basketball Association (ABA) and was the best-known player in that league when it merged into the National Basketball Association (NBA) after the 1975–76 season. Erving won three championships, four Most Valuable Player Awards, and three scoring titles with the ABA's Virginia Squires and New York Nets (now the NBA's Brooklyn Nets) and the NBA's Philadelphia 76ers. Read more on Wikipedia

Since 2007, the English Wikipedia page of Julius Erving has received more than 3,806,836 page views. His biography is available in 44 different languages on Wikipedia making him the 14th most popular basketball player.