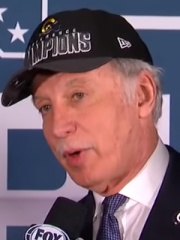 Enos Stanley Kroenke (; born July 29, 1947) is an American billionaire businessman. He is the owner of Kroenke Sports & Entertainment, which is the holding company of Arsenal F.C. of the Premier League and Arsenal W.F.C. of the WSL, the Los Angeles Rams of the NFL, Denver Nuggets of the NBA, Colorado Avalanche of the NHL, Colorado Rapids of Major League Soccer, Colorado Mammoth of the National Lacrosse League, the Los Angeles Gladiators of the Overwatch League, and the Los Angeles Guerrillas of the Call of Duty League. The Nuggets and Avalanche franchises are held in the name of his wife, Ann Walton Kroenke, to satisfy NFL ownership restrictions that forbid a team owner from having teams in other markets. Read more on Wikipedia