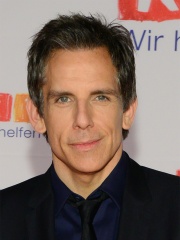 Benjamin Edward Meara Stiller (born November 30, 1965) is an American actor, comedian, producer, film director, and screenwriter. He is the son of the late comedians and actors Jerry Stiller and Anne Meara.After beginning his acting career with a play, Stiller wrote several mockumentaries and was offered his own show, titled The Ben Stiller Show, which he produced and hosted for its 13-episode run. Having previously acted in television, he began acting in films. Read more on Wikipedia

Ben Stiller is most famous for his comedic roles in films such as "Zoolander," "There's Something About Mary," and "Meet the Parents."