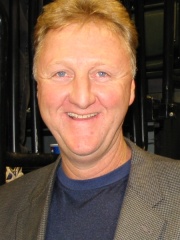 Larry Joe Bird (born December 7, 1956) is an American former professional basketball player, coach, and executive in the National Basketball Association (NBA). Nicknamed "the Hick from French Lick" and "Larry Legend", Bird is widely regarded as one of the greatest basketball players of all time. He is the only person in NBA history to be named Rookie of the Year, Most Valuable Player, Finals MVP, All-Star MVP, Coach of the Year, and Executive of the Year.Growing up in French Lick, Indiana, he was a local basketball star. Read more on Wikipedia

Larry Bird is most famous for his career in the NBA. He played for the Boston Celtics from 1979-1992 and helped the team win three NBA championships. He was a three-time MVP and 12-time All-Star.