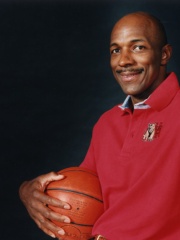 Clyde Austin Drexler (born June 22, 1962) is an American former professional basketball player and the commissioner of the Big3 3-on-3 basketball league. Nicknamed "Clyde the Glide", he played 15 seasons in the National Basketball Association (NBA), spending a majority of his career with the Portland Trail Blazers before finishing with the Houston Rockets. He was a ten-time NBA All-Star and named to the NBA's 50th and 75th anniversary teams. Read more on Wikipedia

Clyde Drexler is most famous for being a professional basketball player. He played in the NBA from 1983 to 2003, and he won two NBA championships with the Houston Rockets.