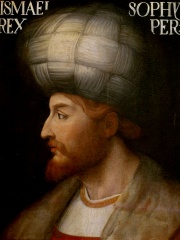 Ismail I (Persian: اسماعیل, romanized: Esmāʿīl, pronounced [esmɒːʔiːl]; July 17, 1487 – May 23, 1524), also known as Shah Ismail (شاه اسماعیل), was the founder of the Safavid dynasty of Iran, ruling as its King of Kings (Shahanshah) from 1501 to 1524. His reign is often considered the beginning of modern Iranian history, as well as one of the gunpowder empires.The rule of Ismail I is one of the most vital in the history of Iran. Before his accession in 1501, Iran, since its conquest by the Arabs eight-and-a-half centuries earlier, had not existed as a unified country under native Iranian rule, but had been controlled by a series of Arab caliphs, Turkic sultans, and Mongol khans. Read more on Wikipedia

Since 2007, the English Wikipedia page of Ismail I has received more than 1,080,319 page views. His biography is available in 59 different languages on Wikipedia. Ismail I is the 97th most popular writer (up from 117th in 2019), the 11th most popular biography from Iran and the most popular Iranian Writer.

Page views of Ismail IS by language