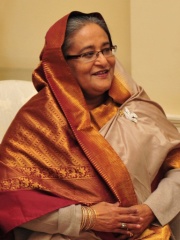 Sheikh Hasina (Bengali: শেখ হাসিনা, /'ʃekʰ ɦɐsɪna/, SHEKH ha-si-na; English: , SHAYK hə-SEE-nə; born 28 September 1947), also known by her married name Sheikh Hasina Wazed (Bengali: শেখ হাসিনা ওয়াজেদ), is a Bangladeshi politician serving as the 11th and 13th Prime Minister of the government of the People's Republic of Bangladesh, having held the office since January 2009. Having previously served as Prime Minister for five years, she is the longest-serving Prime Minister in the history of Bangladesh. Hasina is the daughter of Bangladesh's first President and founding father Sheikh Mujibur Rahman, the eldest of his five children. Read more on Wikipedia

Among politicians, Sheikh Hasina ranks 5,060 out of 15,710. Before her are Ny-Hor, Haakon Ericsson, Moncef Marzouki, Eystein I of Norway, László Csatáry, and Reginald Johnston. After her are Karl Nesselrode, Khayu, Gaius Marius the Younger, Nizam-ul-Mulk, Asaf Jah I, Bikheris, and Dalmatius.

Among POLITICIANS In Bangladesh