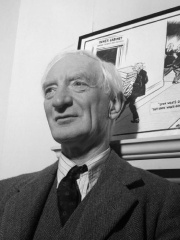 William Henry Beveridge, 1st Baron Beveridge, (5 March 1879 – 16 March 1963) was a British economist and Liberal politician who was a progressive and social reformer who played a central role in designing the British welfare state. His 1942 report Social Insurance and Allied Services (known as the Beveridge Report) served as the basis for the welfare state put in place by the Labour government elected in 1945.He built his career as an expert on unemployment insurance. He served on the Board of Trade as Director of the newly created labour exchanges, and later as Permanent Secretary of the Ministry of Food. Read more on Wikipedia

William Beveridge is most famous for his report on the five giants of want, which was published in 1942. The report identified five "giant evils" that were the major obstacles to achieving full employment: squalor, ignorance, want, idleness, and disease.

Among ECONOMISTS In Bangladesh

Among economists born in Bangladesh, William Beveridge ranks 1. After him are Fakhruddin Ahmed (1940).