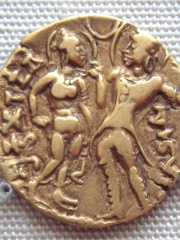 Chandragupta I is most famous for his military accomplishments. He is credited with overthrowing the Nanda dynasty and establishing the Mauryan Empire.

Page views of Chandragupta IS by language

Among politicians, Chandragupta I ranks 3,742 out of 15,710. Before him are Issey Miyake, John Rabe, Hugh, Count of Vermandois, Nawal El Saadawi, Harald Quandt, and Emperor An of Han. After him are Imagawa Yoshimoto, Ōkubo Toshimichi, Martinian, Eiríkr Hákonarson, Maria Beatrice d'Este, Duchess of Massa, and Švitrigaila.

Among people born in 250, Chandragupta I ranks 18. Before him are Carinus, Postumus, Tetricus I, Hormizd I, Bahram I, and Bahram II. After him are Martinian, Marcus Aurelius Marius, Donatus Magnus, Regalianus, Saint Chrysogonus, and Macrianus Minor.

Among POLITICIANS In Bangladesh