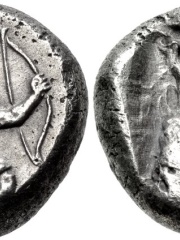 Xerxes II (; Old Persian: 𐎧𐏁𐎹𐎠𐎼𐏁𐎠 Xšayār̥šā; Ancient Greek: Ξέρξης Xérxēs; died 424 BC) was a Persian king who was very briefly a ruler of the Achaemenid Empire, as the son and successor of Artaxerxes I. After a reign of forty-five days—where he only had control over the Persian heartlands—he was assassinated in 424 BC by his half-brother Sogdianus, who in turn was murdered by Darius II six months later. He is an obscure historical figure known primarily from the writings of Ctesias. He was the only legitimate son of Artaxerxes I and Damaspia, and is known to have served as crown prince. The last inscription mentioning Artaxerxes I being alive can be dated to 424 BC. Read more on Wikipedia

Xerxes II of Persia is most famous for his failed invasion of Greece in 480 BC.

Page views of Xerxes II of Persias by language

Among politicians, Xerxes II of Persia ranks 1,597 out of 15,577. Before him are Abel, King of Denmark, Ptolemy VIII Physcon, Al-Hakim bi-Amr Allah, Edward the Confessor, Al-Mu'tasim, and Carloman. After him are Joseph I of Portugal, Alfonso VIII of Castile, Sergey Shoygu, Frederick Augustus I of Saxony, Maria Luisa of Spain, and Frederick III, Elector of Saxony.

Others Deceased in 424 BC