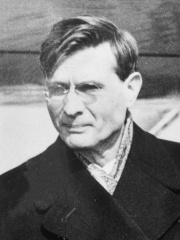 Mikhail Andreyevich Suslov (Russian: Михаи́л Андре́евич Су́слов; 21 November [O.S. 8 November] 1902 – 25 January 1982) was a Soviet statesman during the Cold War. He served as Second Secretary of the Communist Party of the Soviet Union from 1965, and as unofficial chief ideologue of the party until his death in 1982. Suslov was responsible for party democracy and power separation within the Communist Party. Read more on Wikipedia

Mikhail Suslov was a Soviet politician who served as the chairman of the Presidium of the Supreme Soviet from 1964 to 1982. He was a key figure in the country's transition from a one-party system to a multi-party system.

Among politicians, Mikhail Suslov ranks 2,283 out of 15,710. Before him are Isaias Afwerki, Edward Rydz-Śmigły, Vasily II of Moscow, Śuddhodana, Vincent Auriol, and Isma'il Pasha. After him are Francis II of the Two Sicilies, Jean Sylvain Bailly, Emperor Go-Momozono, Marcelo Caetano, Louis I, Duke of Bourbon, and Alexander Jagiellon.