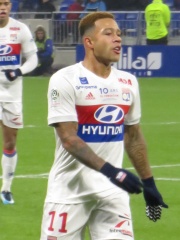 Memphis Depay (Dutch pronunciation: [ˈmɛɱfɪz dəˈpɑi]; born 13 February 1994), also known simply as Memphis, is a Dutch professional footballer who plays as a forward for La Liga club Atlético Madrid and the Netherlands national team. Memphis began his professional career with PSV Eindhoven, where, under the influence of manager Phillip Cocu, he became an integral part of the team, scoring 49 goals in 124 games across all competitions. During the 2014–15 season, he was the Eredivisie's top scorer with 22 goals in 30 games, and helped the team win the Eredivisie title for the first time since 2008. Read more on Wikipedia

Among people born in 1994, Memphis Depay ranks 5. Before him are Justin Bieber, RM, Halsey, and Kepa Arrizabalaga. After him are J-Hope, Kenneth Zohore, Dakota Fanning, Harry Styles, Kai, Hakan Çalhanoğlu, and Dimash Kudaibergen.