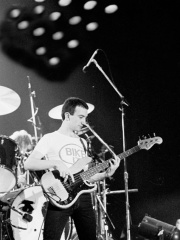 John Richard Deacon (born 19 August 1951) is an English retired musician, best known for being the bassist for the rock band Queen. He composed several songs for the group, including Top 10 hits "You're My Best Friend", "Another One Bites the Dust", and "I Want to Break Free"; co-wrote "Under Pressure", "Friends Will Be Friends" and "One Vision"; and he was involved in the band's financial management. Deacon grew up in Oadby, Leicestershire, playing bass in a local band, The Opposition, before moving to study electronics at Chelsea College, London. Read more on Wikipedia

John Deacon is most famous for being a member of the British rock band Queen.