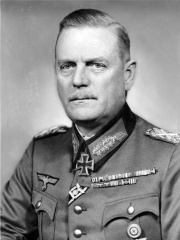 Wilhelm Bodewin Johann Gustav Keitel (German pronunciation: [ˈkaɪ̯tl̩]; 22 September 1882 – 16 October 1946) was a German field marshal and war criminal who held office as chief of the Oberkommando der Wehrmacht (OKW), the high command of Nazi Germany's Armed Forces, during the Second World War. In that capacity, Keitel signed a number of criminal orders and directives that led to numerous war crimes. Keitel's rise to the Wehrmacht high command began with his appointment as the head of the Armed Forces Office at the Reich Ministry of War in 1935. Read more on Wikipedia

Wilhelm Keitel was a German field marshal who served as the Chief of the German Armed Forces High Command, or Oberkommando der Wehrmacht, from 1938 to 1945. He was tried and found guilty of war crimes and crimes against humanity at the Nuremberg Trials.

Among military personnels, Wilhelm Keitel ranks 28 out of 1,468. Before him are Pyrrhus of Epirus, Cao Cao, Charles XIV John of Sweden, Cesare Borgia, Simo Häyhä, and Jochi. After him are Friedrich Paulus, Tokugawa Ieyasu, Vercingetorix, Douglas MacArthur, Lü Bu, and Baron Munchausen.