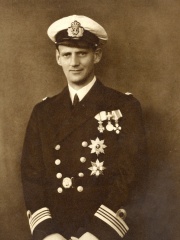 Frederick IX (Danish: Christian Frederik Franz Michael Carl Valdemar Georg; 11 March 1899 – 14 January 1972) was King of Denmark from 1947 to 1972.Born into the House of Glücksburg, Frederick was the elder son of King Christian X and Queen Alexandrine of Denmark. He became crown prince when his father succeeded as king in 1912. As a young man, he was educated at the Royal Danish Naval Academy. Read more on Wikipedia

Frederick IX was King of Denmark from 1947 to 1972. He was the son of Christian X and Alexandrine of Mecklenburg-Schwerin. He married Ingrid of Sweden, with whom he had four children. In 1947, he succeeded to the throne on the death of his father.

Page views of Frederick IX of Denmarks by language

Among politicians, Frederick IX of Denmark ranks 486 out of 15,710. Before him are Şehzade Bayezid, Sergio Mattarella, Alexios I Komnenos, Stephen Báthory, Louis VIII of France, and Imre Nagy. After him are Moshe Dayan, William IV of the United Kingdom, Maximilian I of Mexico, Joseph I, Holy Roman Emperor, James II of England, and Agrippina the Younger.