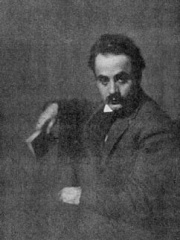 Gibran Khalil Gibran (Arabic: جبران خليل جبران‎, ALA-LC: Jubrān Khalīl Jubrān, pronounced [ʒʊˈbraːn xaˈliːl ʒʊˈbraːn], or Jibrān Khalīl Jibrān, pronounced [ʒɪˈbraːn xaˈliːl ʒɪˈbraːn]; January 6, 1883 – April 10, 1931), usually referred to in English as Kahlil Gibran (pronounced kah-LEEL ji-BRAHN), was a Lebanese-American writer, poet and visual artist, also considered a philosopher although he himself rejected the title. He is best known as the author of The Prophet, which was first published in the United States in 1923 and has since become one of the best-selling books of all time, having been translated into more than 100 languages.Born in a village of the Ottoman-ruled Mount Lebanon Mutasarrifate to a Maronite family, the young Gibran immigrated with his mother and siblings to the United States in 1895. As his mother worked as a seamstress, he was enrolled at a school in Boston, where his creative abilities were quickly noticed by a teacher who presented him to photographer and publisher F. Holland Day. Read more on Wikipedia

Khalil Gibran is most famous for his book The Prophet. The book is a collection of poetry and prose that was written in 1923.

Among writers, Khalil Gibran ranks 184 out of 5,794. Before him are Terence, Naguib Mahfouz, John Milton, Ahmad ibn Hanbal, John the Evangelist, and Diogenes Laërtius. After him are Georges Simenon, Mansur Al-Hallaj, Peter Handke, Stéphane Mallarmé, Yukio Mishima, and Nizami Ganjavi.

Among WRITERS In Lebanon