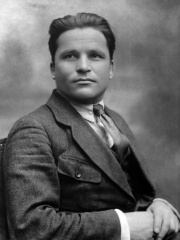 Sergei Mironovich Kirov (born Sergei Mironovich Kostrikov, 27 March 1886 – 1 December 1934) was a Soviet politician and Bolshevik revolutionary whose assassination led to the first Great Purge. Kirov was an early revolutionary in the Russian Empire and member of the Bolshevik faction of the Russian Social Democratic Labour Party. Read more on Wikipedia

Sergey Kirov was a Russian communist party leader and a close ally of Joseph Stalin. He was assassinated in 1934, which led to the Great Purge.

Among politicians, Sergey Kirov ranks 872 out of 15,710. Before him are Nikephoros I, Charles I of Hungary, Frederick VI of Denmark, Nadezhda Krupskaya, Josiah, and Emperor Gaozu of Tang. After him are Justin Trudeau, John VIII Palaiologos, Lutz Graf Schwerin von Krosigk, Leo VI the Wise, Stefan Dušan, and Adolf Frederick, King of Sweden.