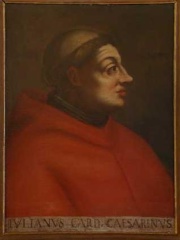 Julian Cesarini the Elder (It.: Giuliano Cesarini, seniore) (1398 in Rome – November 10, 1444 in Varna, Bulgaria) was one of the group of brilliant cardinals created by Pope Martin V on the conclusion of the Western Schism. His intellect and diplomacy made him a powerful agent first of the Council of Basel and then, after he broke with the Conciliar movement at Basel, of Papal superiority against the Conciliar movement. Read more on Wikipedia

Among religious figures, Julian Cesarini ranks 1,064 out of 2,272. Before him are Yolanda of Poland, Stanisław Dziwisz, Jean-Marie Villot, Nicanor the Deacon, Demetrios I of Constantinople, and Adhemar of Le Puy. After him are Nahshon, Kartini, Margaret of Cortona, Felix of Valois, Muhammad ibn Ya'qub al-Kulayni, and Edith Cavell.

Among people born in 1398, Julian Cesarini ranks 3. Before him are John II of Aragon and Moctezuma I. After him are Emine Hatun, Theodorus Gaza, Francesco Filelfo, and Íñigo López de Mendoza, 1st Marquis of Santillana. Among people deceased in 1444, Julian Cesarini ranks 7. Before him are Władysław III of Poland, Robert Campin, Leonardo Bruni, Bernardino of Siena, Olivera Despina, and Mark of Ephesus. After him are John Beaufort, 1st Duke of Somerset, Joseph Albo, and Gianfrancesco I Gonzaga, Marquess of Mantua.