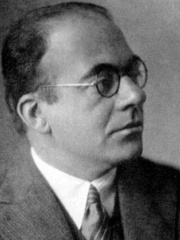 Erwin Panofsky (March 30, 1892 in Hannover – March 14, 1968 in Princeton, New Jersey) was a German-Jewish art historian, whose academic career was pursued mostly in the U.S. after the rise of the Nazi regime. Panofsky's work represents a high point in the modern academic study of iconography, which he used in hugely influential works like his "little book" Renaissance and Renascences in Western Art and his masterpiece, Early Netherlandish Painting. Many of his works are still in print, including Studies in Iconology: Humanist Themes in the Art of the Renaissance (1939), Meaning in the Visual Arts (1955), and his 1943 study The Life and Art of Albrecht Dürer. Read more on Wikipedia

Erwin Panofsky is most famous for his work in the field of art history. He was a German-born American art historian and an expert on medieval and Renaissance art.

Among HISTORIANS In Germany