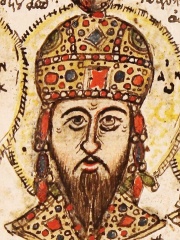 John VII Palaiologos or Palaeologus (Greek: Ἰωάννης Παλαιολόγος, romanized: Iōánnēs Palaiológos; 1370 – 22 September 1408) was Byzantine emperor for five months in 1390, from 14 April to 17 September. A handful of sources suggest that John VII sometimes used the name Andronikos (Ἀνδρόνικος), possibly to honour the memory of his father, Andronikos IV Palaiologos, though he reigned under his birth name. Andronikos IV was the firstborn son of Emperor John V Palaiologos (r. Read more on Wikipedia

John VII Palaiologos is most famous for being the last Byzantine Emperor. He was the son of Emperor Andronikos III Palaiologos and Empress Irene. He became co-emperor with his father at the age of eight. When his father died in 1341, John VII became the sole emperor. His reign was plagued by civil war and he was overthrown in 1354.

Among politicians, John VII Palaiologos ranks 2,477 out of 15,577. Before him are George William, Elector of Brandenburg, Ferdinand Marcos, Weneg, Erich Mielke, Isabella Jagiellon, and Emperor Suzong of Tang. After him are Haakon IV of Norway, Urukagina, Ferdinand Philippe, Duke of Orléans, Bahram V, Brasidas, and James II of Scotland.

Among people born in 1370, John VII Palaiologos ranks 7. Before him are Pope Gregory XI, Antipope John XXIII, Isabeau of Bavaria, Leonardo Bruni, Olaf II of Denmark, and Gentile da Fabriano. After him are Frederick I, Elector of Saxony, Lorenzo Monaco, Erasmo of Narni, Švitrigaila, William, Duke of Austria, and Antipope Clement VIII. Among people deceased in 1408, John VII Palaiologos ranks 2. Before him is Taejo of Joseon. After him are Valentina Visconti, Duchess of Orléans, Ashikaga Yoshimitsu, Miran Shah, John Gower, and Henry Percy, 1st Earl of Northumberland.