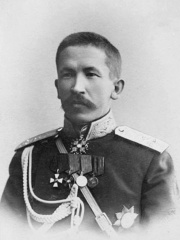 Lavr Georgiyevich Kornilov (Russian: Лавр Гео́ргиевич Корни́лов, IPA: [ˈlavr ɡʲɪˈorɡʲɪjɪvʲɪtɕ kɐrˈnʲiləf]; 30 August [O.S. 18 August] 1870 – 13 April 1918) was a Russian military intelligence officer, explorer, and general in the Imperial Russian Army during World War I and the ensuing Russian Civil War. Kornilov was of Siberian Cossack origin. Today he is best remembered for the Kornilov Affair, an unsuccessful endeavor in August/September 1917 that was intended to strengthen Alexander Kerensky's Provisional Government, but which led to Kerensky eventually having Kornilov arrested and charged with attempting a coup d'état, and ultimately undermined Kerensky's rule.Kornilov escaped from jail in November 1917 and subsequently became the military commander of the anti-Bolshevik Volunteer Army which took the charge of anti-Bolshevik opposition in the south of Russia. Read more on Wikipedia

Lavr kornilov was a Russian general who led the Kornilov Affair, an attempted coup d'état against the Russian Provisional Government in 1917.

Among MILITARY PERSONNELS In Kazakhstan