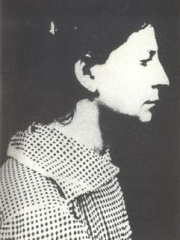 Fanny Efimovna Kaplan (Russian: Фа́нни Ефи́мовна Капла́н; real name Feiga Haimovna Roytblat, Фейга Хаимовна Ройтблат; February 10, 1890 – September 3, 1918) was a Ukrainian Jewish woman, Socialist-Revolutionary, and early Soviet dissident. She was arrested for the attempted assassination of Vladimir Lenin and was executed by the Cheka in 1918. As a member of the Socialist Revolutionary Party, Kaplan viewed Lenin as a "traitor to the revolution" when the Bolsheviks enacted one-party rule and banned her party. Read more on Wikipedia

Fanny Kaplan was a Russian-born anarchist who attempted to assassinate Vladimir Lenin on August 30, 1918.

Among politicians, Fanny Kaplan ranks 2,137 out of 15,577. Before her are Tang of Shang, Albert, King of Sweden, Herennius Etruscus, Eadwig, Joseph McCarthy, and Maria Mandl. After her are Charles III, Duke of Bourbon, Edward de Vere, 17th Earl of Oxford, Senusret II, Omar Bongo, Prince Philippe, Count of Paris, and Tomoe Gozen.