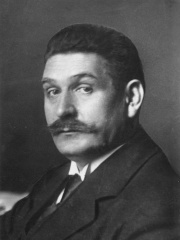 Gustav Adolf Bauer (listen ; 6 January 1870 – 16 September 1944) was a German Social Democratic Party leader and the chancellor of Germany from June 1919 to March 1920. He served as head of government for nine months. Prior to becoming head of government, Bauer had been Minister of Labour in the first democratically elected German cabinet. Read more on Wikipedia

Gustav Bauer is most famous for his work in the field of human physiology. He was one of the first to study how muscles work and how the body uses oxygen.

Among politicians, Gustav Bauer ranks 2,396 out of 15,577. Before him are Polyxena, Géza I of Hungary, Géza, Grand Prince of the Hungarians, Elsa Einstein, Gian Galeazzo Visconti, and Rudolf I of Bohemia. After him are Émile Loubet, Isabella II of Jerusalem, Ali al-Sistani, Marie José of Belgium, Siptah, and Duchess Elisabeth of Württemberg.