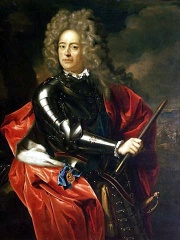 General John Churchill, 1st Duke of Marlborough, 1st Prince of Mindelheim, 1st Count of Nellenburg, Prince of the Holy Roman Empire, (26 May 1650 – 16 June 1722 O.S.) was an English soldier and statesman whose career spanned the reigns of five monarchs. From a gentry family, he served first as a page at the court of the House of Stuart under James, Duke of York, through the 1670s and early 1680s, earning military and political advancement through his courage and diplomatic skill. Churchill's role in defeating the Monmouth Rebellion in 1685 helped secure James on the throne, but he was a key player in the military conspiracy that led to James being deposed during the Glorious Revolution. Read more on Wikipedia

John Churchill, 1st Duke of Marlborough, is most famous for his military career as a general in the British Army. He served in the Nine Years' War, the War of the Spanish Succession, and the War of the Quadruple Alliance.