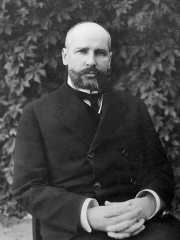 Pyotr Arkadyevich Stolypin (Russian: Пётр Арка́дьевич Столы́пин, IPA: [pʲɵtr ɐrˈkadʲjɪvʲɪtɕ stɐˈlɨpʲɪn]; 14 April [O.S. 2 April] 1862 – 18 September [O.S. 5 September] 1911) was a Russian politician and statesman. He served as the third prime minister and the interior minister of the Russian Empire from 1906 until his assassination in 1911. The greatest reformer of Russian society and economy; his reforms caused unprecedented growth of the Russian state, which was stopped by his assassination only. Read more on Wikipedia

Pyotr Stolypin was a Russian politician and reformer who served as the Prime Minister of Russia from 1906 to 1911. He is most famous for his land reforms, the creation of the zemstvo, and his attempts to establish a constitutional monarchy.

Among politicians, Pyotr Stolypin ranks 1,802 out of 15,577. Before him are Kaidu, Ish-bosheth, Peter II of Aragon, Djet, Princess Sibylla of Saxe-Coburg and Gotha, and Sophia Palaiologina. After him are Myeongjong of Joseon, Marie Thérèse Louise of Savoy, Princesse de Lamballe, Michael V Kalaphates, Archduchess Maria Josepha of Austria, Kurt Daluege, and Werner von Fritsch.