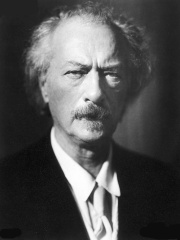 Ignacy Jan Paderewski (Polish: [iɡˈnatsɨ ˈjan padɛˈrɛfskʲi]; 18 November [O.S. 6 November] 1860 – 29 June 1941) was a Polish pianist and composer who became a spokesman for Polish independence. In 1919, he was the new nation's Prime Minister and foreign minister during which he signed the Treaty of Versailles, which ended World War I.A favorite of concert audiences around the world, his musical fame opened access to diplomacy and the media, as possibly did his status as a freemason, and charitable work of his second wife, Helena Paderewska. Read more on Wikipedia

Ignacy Jan Paderewski was a Polish pianist and politician who was most famous for his performance of the Polonaise in A-flat major, Op. 40, No. 1 by Frédéric Chopin at the inauguration of the first president of Poland, Gabriel Narutowicz, on October 12, 1922.

Among politicians, Ignacy Jan Paderewski ranks 2,191 out of 15,577. Before him are Abdrabbuh Mansur Hadi, Michael Collins, Prince Carl, Duke of Västergötland, Charles Martel of Anjou, Peter, King of Hungary, and Robert, King of Naples. After him are Alfonso III of Asturias, Bill de Blasio, Haakon the Good, Antanas Smetona, Tianqi Emperor, and Mara Branković.