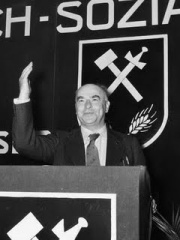 Otto Johann Maximilian Strasser (also German: Straßer, see ß; 10 September 1897 – 27 August 1974) was a German politician and an early member of the Nazi Party. Otto Strasser, together with his brother Gregor Strasser, was a leading member of the party's left-wing faction, and broke from the party due to disputes with the dominant Hitlerite faction. He formed the Black Front, a group intended to split the Nazi Party and take it from the grasp of Hitler. Read more on Wikipedia

Otto Strasser was a German politician and a member of the Nazi Party. He was expelled from the party in 1930, and later founded the Black Front, an anti-Nazi organization.

Among politicians, Otto Strasser ranks 1,784 out of 15,577. Before him are Agathocles of Syracuse, Hor-Aha, John Sigismund, Elector of Brandenburg, Dorgon, Ammar ibn Yasir, and Carloman of Bavaria. After him are Prince Maximilian of Baden, Gordian I, Louis the Child, Ziying, Infante Juan, Count of Barcelona, and Munjong of Joseon.