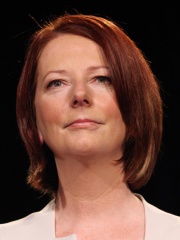 Julia Eileen Gillard (born 29 September 1961) is a British-born Australian politician who served as the 27th Prime Minister of Australia and Leader of the Labor Party from 2010 to 2013, the first and only woman to date to hold either role. She previously held the roles of Deputy Prime Minister of Australia, Minister for Education, Minister for Employment and Workplace Relations and Minister for Social Inclusion from 2007 to 2010. Born in Barry, Wales, Gillard migrated with her family to Adelaide in South Australia in 1966. Read more on Wikipedia

Among politicians, Julia Gillard ranks 6,064 out of 15,710. Before her are Tôn Đức Thắng, Wellington Koo, Rifaat al-Assad, Euphemia, Yuri II of Vladimir, and Girolamo Riario. After her are Julia the Younger, Jizi, Agis I, Theodoric I, Margrave of Meissen, Diana Abgar, and Tiberius Julius Alexander.