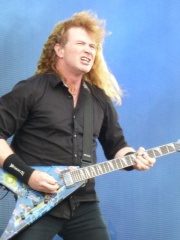 David Scott Mustaine (born September 13, 1961) is an American musician. He is the co-founder, lead vocalist, rhythm guitarist and primary songwriter of the thrash metal band Megadeth, as well as their sole consistent member. Mustaine has released sixteen studio albums with Megadeth, sold over 50 million albums worldwide, with six albums platinum-certified, and won a Grammy Award for Best Metal Performance in 2017 at the 59th Grammy Awards, for the title track of their fifteenth studio album, Dystopia.Prior to forming Megadeth, Mustaine was the original lead guitarist of Metallica but did not appear on any albums. Read more on Wikipedia

Among musicians, Dave Mustaine ranks 283 out of 2,662. Before him are Nick Cave, Beck, Per Gessle, Clara Haskil, Alan Parsons, and Will.i.am. After him are Tiësto, Ornette Coleman, Igor Oistrakh, Sixto Rodriguez, Eric Carr, and Charles Mingus.