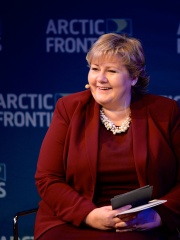 Erna Solberg (Norwegian: [ˈæ̀ːɲɑ ˈsûːlbærɡ]; born 24 February 1961) is a Norwegian politician who served as prime minister of Norway from 2013 to 2021, and has been Leader of the Conservative Party since May 2004.Solberg was first elected to the Storting in 1989, and served as Minister of Local Government and Regional Development in Bondevik's Second Cabinet from 2001 to 2005. During her tenure, she oversaw the tightening of immigration policy and the preparation of a proposed reform of the administrative divisions of Norway. After the 2005 election, she chaired the Conservative Party parliamentary group until 2013. Read more on Wikipedia

Among politicians, Erna Solberg ranks 2,753 out of 15,710. Before her are Julius Schreck, Apepi, Mentuhotep I, Pelopidas, Eduard Limonov, and Mohamed Hussein Tantawi. After her are Franz I, Prince of Liechtenstein, Rudolf von Laban, Gnaeus Domitius Corbulo, Cleopatra Selene of Syria, Marie of Luxembourg, Queen of France, and Kanishka.