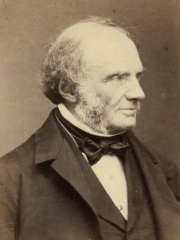 John Russell, 1st Earl Russell, (18 August 1792 – 28 May 1878), known by his courtesy title Lord John Russell before 1861, was a British Whig and Liberal statesman who served as Prime Minister of the United Kingdom from 1846 to 1852 and again from 1865 to 1866. The third son of the 6th Duke of Bedford, Russell was educated at Westminster School and Edinburgh University before entering Parliament in 1813. In 1828 he took a leading role in the repeal of the Test Acts which discriminated against Catholics and Protestant dissenters. Read more on Wikipedia

Among politicians, John Russell, 1st Earl Russell ranks 5,426 out of 15,710. Before him are Princess Katherine of Greece and Denmark, Horace Walpole, Pharnaces I of Pontus, Amadeus II, Count of Savoy, Borrell II, Count of Barcelona, and Balak. After him are Psammuthes, Hugo Banzer, Lajos Batthyány, George Clinton, Tervel of Bulgaria, and Dino Grandi.