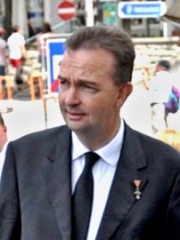 Karl von Habsburg (given names: Karl Thomas Robert Maria Franziskus Georg Bahnam; born 11 January 1961) is an Austrian politician and the head of the House of Habsburg-Lorraine, therefore being a claimant to the defunct Austro-Hungarian throne. As a citizen of the Republic of Austria, his legal name is Karl Habsburg-Lothringen.Karl is the son of Archduke Otto von Habsburg, Crown Prince of Austria and Princess Regina of Saxe-Meiningen, and the grandson of the last Austro-Hungarian emperor, Charles I. He is head and sovereign of the Austrian Order of the Golden Fleece. Karl von Habsburg served as a Member of the European Parliament for the Austrian People's Party (1996–1999). Read more on Wikipedia

Among politicians, Karl von Habsburg ranks 4,726 out of 15,577. Before him are Constantius Gallus, Yaqub Beg, Christian Wulff, Dušan Simović, Tewodros II, and Robert Kocharyan. After him are Al-Qahir, Ahuitzotl, Ariaramnes, Antiochus X Eusebes, Philip, Duke of Orléans, and Francesco Maria I della Rovere, Duke of Urbino.