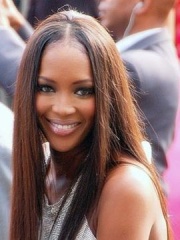 Naomi Elaine Campbell (born 22 May 1970) is a British model, actress and businesswoman. Discovered at the age of 15, she established herself amongst the most recognisable and in-demand models of the late 1980s, the 1990s and the earlier 2000s including modern day. Campbell was one of six models of her generation declared supermodels by the fashion industry and the international press.In addition to her modelling career, Campbell has embarked on other ventures, including an R&B studio album and several acting appearances in film and television, such as the modelling-competition reality show The Face and its international offshoots. Read more on Wikipedia

Naomi Campbell is most famous for being a model.

Among models, Naomi Campbell ranks 6 out of 251. Before her are Behati Prinsloo, Isabella Rossellini, Tina Modotti, Alice Prin, and Carla Bruni. After her are Claudia Schiffer, Cindy Crawford, Brigitte Nielsen, Heidi Klum, Twiggy, and Pattie Boyd.

Among MODELS In United Kingdom