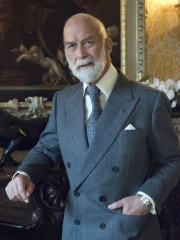 Prince Michael of Kent, (Michael George Charles Franklin; born 4 July 1942) is a member of the British royal family, younger brother of Prince Edward, Duke of Kent. He is a paternal first cousin of Queen Elizabeth II, being a grandson of King George V and Queen Mary. Through his mother, Princess Marina of Greece and Denmark, he is also a first cousin once removed of Prince Philip, Duke of Edinburgh. Read more on Wikipedia

Page views of Prince Michael of Kents by language

Among noblemen, Prince Michael of Kent ranks 293 out of 843. Before him are Duchess Helene of Mecklenburg-Schwerin, Gaston IV, Count of Foix, Robert II, Count of Artois, John Casimir, Count Palatine of Kleeburg, Ernest Augustus, Crown Prince of Hanover, and Maximilian, Duke of Hohenberg. After him are Gioffre Borgia, Grand Duchess Kira Kirillovna of Russia, Philibert I, Duke of Savoy, Duke Maximilian Emanuel in Bavaria, Leopold IV, Duke of Austria, and William Adelin.