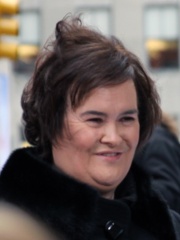 Susan Magdalane Boyle (born 1 April 1961) is a Scottish singer. She rose to fame in 2009 after appearing as a contestant on the third series of Britain's Got Talent, singing "I Dreamed a Dream" from Les Misérables. Boyle's debut studio album, I Dreamed a Dream, was released in November 2009; it became the UK's best-selling debut album of all time, beating the previous record held by Spirit by Leona Lewis, and set a record for first-week sales by a debut album, according to the Official Charts Company. Read more on Wikipedia

Susan Boyle is a Scottish singer who gained international fame after appearing as a contestant on the TV show "Britain's Got Talent" in 2009.