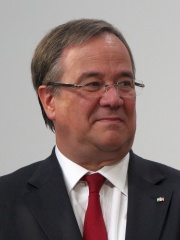 Armin Laschet (German pronunciation: [ˈaʁmiːn ˈlaʃət] (listen); born 18 February 1961) is a German politician who served as Minister President of North Rhine-Westphalia from 27 June 2017 to 26 October 2021. He served as Leader of the Christian Democratic Union (CDU) from 22 January 2021 to 31 January 2022. Read more on Wikipedia

Among politicians, Armin Laschet ranks 4,360 out of 15,577. Before her are Max Amann, Auguste, Duke of Leuchtenberg, Yury Luzhkov, Allen Dulles, Isabella of Valois, and Bayan I. After her are Zhao Tuo, Hor, Ordoño II of León, Antiochus XIII Asiaticus, Trisong Detsen, and Agrippa Menenius Lanatus.