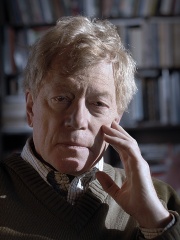 Sir Roger Vernon Scruton (; 27 February 1944 – 12 January 2020) was an English philosopher and writer who specialised in aesthetics and political philosophy, particularly in the furtherance of traditionalist conservative views.Editor from 1982 to 2001 of The Salisbury Review, a conservative political journal, Scruton wrote over 50 books on philosophy, art, music, politics, literature, culture, sexuality, and religion; he also wrote novels and two operas. His most notable publications include The Meaning of Conservatism (1980), Sexual Desire (1986), The Aesthetics of Music (1997), and How to Be a Conservative (2014). Read more on Wikipedia

Roger Scruton is a British philosopher and writer, who is most famous for his writings on aesthetics, culture, and politics.

Among philosophers, Roger Scruton ranks 458 out of 1,089. Before him are Vincent of Beauvais, Luce Irigaray, Francisco Ferrer, James Ussher, Phaedo of Elis, and Linji Yixuan. After him are Jean-Luc Nancy, Dong Zhongshu, Priscian, Antiochus of Ascalon, Berengar of Tours, and Ari Thorgilsson.