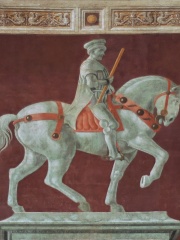 Sir John Hawkwood (c. 1323–1394) was an English soldier who served as a mercenary leader or condottiero in Italy. As his name was difficult to pronounce for non-English-speaking contemporaries, there are many variations of it in the historical record. He often referred to himself as Haukevvod and in Italy he was known as Giovanni Acuto, literally meaning "John Sharp" (or "John the Astute") in reference to his "cleverness or cunning". Read more on Wikipedia

Among politicians, John Hawkwood ranks 4,725 out of 15,710. Before him are Aaron Burr, Prince Louis of Battenberg, Princess Christine Louise of Oettingen-Oettingen, Vaišvilkas, Jarmila Kratochvílová, and Carausius. After him are Leonnatus, Kiril, Prince of Preslav, Ásgeir Ásgeirsson, Emperor Sushun, Neferkara I, and Askar Akayev.

Among people born in 1320, John Hawkwood ranks 7. Before him are Valdemar IV of Denmark, Peter I of Portugal, Toghon Temür, Bertrand du Guesclin, Vukašin of Serbia, and Blanche of Namur. After him are Beatrice of Bourbon, Queen of Bohemia, Galeazzo II Visconti, Cápac Yupanqui, Ragibagh Khan, Louis I of Naples, and Lalleshwari. Among people deceased in 1394, John Hawkwood ranks 3. Before him are Antipope Clement VII and Anne of Bohemia. After him are Mary de Bohun, Constance of Castile, Duchess of Lancaster, Gongyang of Goryeo, Emperor Chōkei, and Maria Angelina Doukaina Palaiologina.