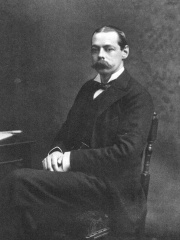 Lord Randolph Henry Spencer-Churchill (13 February 1849 – 24 January 1895) was a British statesman. Churchill was a Tory radical and coined the term 'Tory democracy'. He inspired a generation of party managers, created the National Union of the Conservative Party, and broke new ground in modern budgetary presentations, attracting admiration and criticism from across the political spectrum. Read more on Wikipedia

Since 2007, the English Wikipedia page of Lord Randolph Churchill has received more than 1,368,051 page views. His biography is available in 30 different languages on Wikipedia making him the 5,298th most popular politician.

Among politicians, Lord Randolph Churchill ranks 5,265 out of 14,801. Before him are Emperor Go-Ichijō, Tsarevna Catherine Ivanovna of Russia, Edgar, King of Scotland, Ala ad-Din Tekish, Ansegisel, and Kurmanbek Bakiyev. After him are Prince Henry of Prussia, Grand Duke Michael Pavlovich of Russia, Christian Wulff, Federica Montseny, Mahmud Pasha Angelović, and Podalirius.